We are thrilled to announce our newly established partnership with Operation ABLE! Operation ABLE has provided job seekers with accessible training programs and employment services since 1982 and is dedicated to empowering our community of job seekers, including the underemployed, those in career transition and veterans who need job support services to re-enter the workforce.

Through our partnership, Rian is now an established Senior Community Service Employment Program (SCSEP) Host Agency. SCSEP is a federally funded, work-based job training program for those 55 years and older. As a provider for the SCSEP, Operation ABLE places qualified workers in subsidized positions at non-profit 501(c)(3) organizations and government agencies, such as the Rian Immigrant Center. As a host agency we are required to help the participant grow their skills so that can be used when the participant transitions out of the program, into a permanent position.

The Education Services Program has welcomed our first Admin Support trainee from Operation ABLE, Rosemarie Doe. Rosemarie has become the program’s dedicated student intake coordinator, helping to connect interested clients with the necessary resources to enroll for the Spring 2023 ESOL classes. We are honored to continue this partnership into the new year! 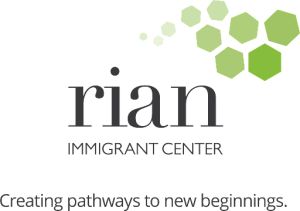